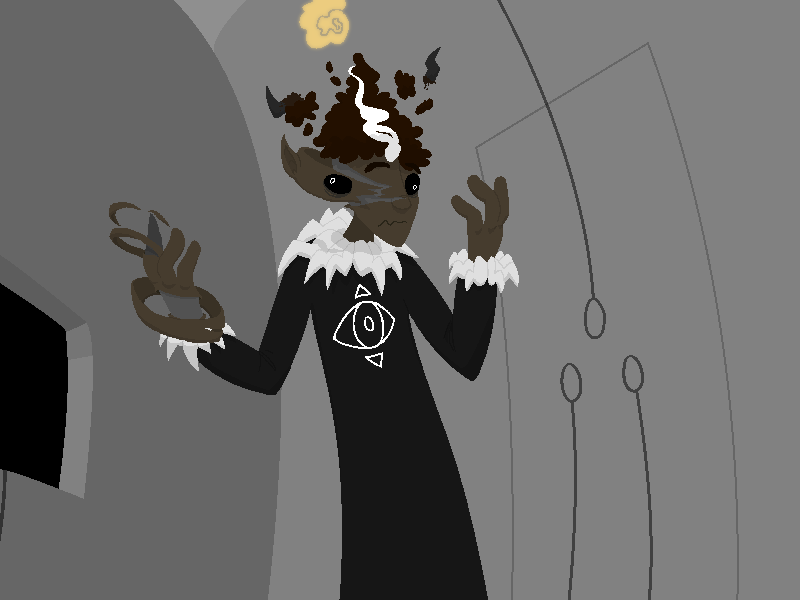 Some eldritch equilibrium shifts, and they rubberband back into a ‘normal’ ten-odd feet tall.

ARCHIVIST: “Now, I recall that humans don’t tend to like that kind of perspective shift for too long. Well, the human I last met didn’t, said it made the eyeballs itch. And, er, wait! I have a form better suited for interacting with humans!”

They blur with motion and, er, unpeel into a far more normal-looking person[dubious - discuss]. It’s really rather unsettling, and reminds you of what you and Daniel saw, with what you assume was Arbiter. Or some component thereof.

Honestly, everything these people do is low-to-highkey unsettling.

ARCHIVIST: “Happy to be of service! Now, dear Sage, dear Tinkerer, can you still hear us?”

DANIEL: “Are you talking to us?”

SAM: “Why do you use those weird names?”

ARCHIVIST: “I’m not sure I understand your question.”

SAM: “They’re called Daniel and Jacqueline. Not ‘Tinkerer’ and ‘Sage’.”

ARCHIVIST: “Well, I’m using a non-standard shortening, but those are the names I see when I look at them. Hm. That’s a bad analogy. ‘See’ gives an entirely erroneous description of the sense I use. Er, the last time I heard it described, it was called ‘florgle’, but that was a made-up word by the last person I explained this stuff to outside my dear siblings.”

JACQUELINE: “Not that this isn’t fascinating, but we’re still in different rooms, blocked off by impenetrable black stuff.”

ARCHIVIST: “Aha, well, that’s where you’re wrong. The Voidwalls are perfectly penetrable, it’s just that human-borne abilities are specifically disallowed from breaking it. Sometimes. There have been exceptions, but that wouldn’t stop you using conventional means to get through.”

ARCHIVIST: “Er, as a point of comparison… do you remember what a ‘nuclear bomb’ is?”

ARCHIVIST: “They are the most energy-dense unassistedly human-made bombs on Earth Crimson.”

ASH: “And those would get through the Voidwalls?”

ARCHIVIST: “Well. You’d have to use all of them. But yes!”

DANIEL: “Given that, unless someone’s been holding out on me, we don’t have all the world’s nukes hidden somewhere about our persons, couldn’t you just do the brain-breaky thing again so we can climb over?”

ARCHIVIST: “Um. It’d probably not work. And you might die. But apart from that, it’s a good plan.”

DANIEL: “Yeah, some slight issues with that plan, then.”

ARCHIVIST: “They’re actually rather significant - you’d be moving through dimensions you don’t normally inhabit, that you couldn’t see, and that might end up with you dropping out of the shadow of the Location and being uniformly spread over the entire wheel of universes.”