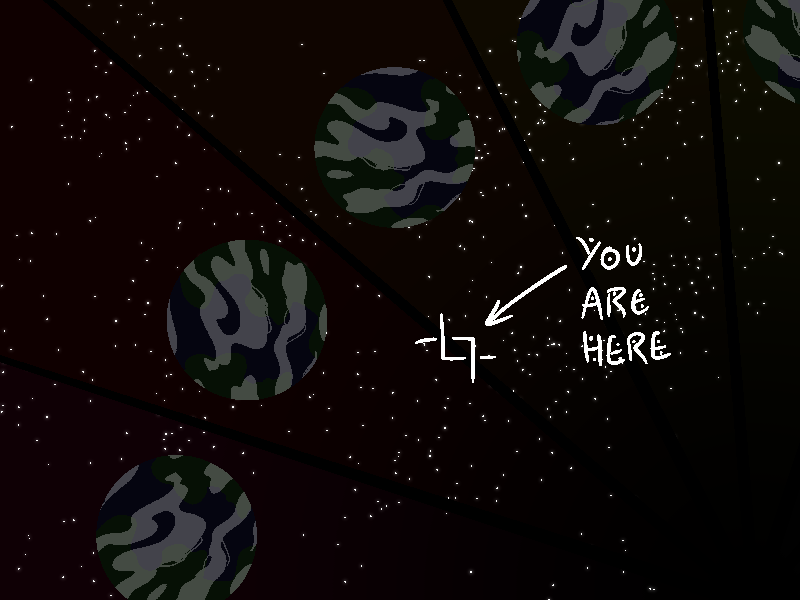 SAM: “Which Earth are we from, then? Are we even from the same Earth?”

ARCHIVIST: “Ah, you are. Earth-Crimson, I believe you call it.”

Your brain twinges with mild recognition at that phrase.

ARCHIVIST: “The Location’s shadow itself hangs between two Earths, dangling from the ‘true’ Location like a… well, like a parachute, maybe? Or a shadow, or a dragline, or a surface layer extending in a direction kata, and honestly analogies in your language kinda break down. Took me ages to explain to… haha, well, you don’t want me to prattle on about digressions.”

SAM: “Are you going to save the Earth…s?”

ASH: “Question: why were you killed before the rest of your siblings?”

ARCHIVIST: “Ah. Well, we had a vote, and it was two to one against me. Brother Dearest was still fuming about, er, certain past events, so he voted to kill me forever. Sister Dearest said no, and also that that was pretty much impossible, and Sibling Dearest tiebroke by saying that it’d be most harmonious if I was put away for a million years, or until another sibling woke me up. I think something went wrong, though, because I certainly wasn’t in exile, as I expected from that.”

ASH: “That’s… an unusual approach to conflict resolution, by my experience here.”

ARCHIVIST: “Well, I guess that’s a human perspective. And I did, er, take some liberties with the retelling, to make it easier to comprehend. And also because my memory is flaky. I think I lost some somewhere.”